What could Nick possibly do for an encore?

Back in his Staples High School days, when he was looking at colleges, Nick heard the Whiffenpoofs sing. They were a major reason he decided to apply to Yale — and, once accepted, to attend.

Self-described as “the world’s oldest and best-known collegiate a cappella group” — which is probably true — the Whiffs are 14 seniors who leave school for a year. They travel the world, singing for alumni clubs, schools and organizations, and in public concerts. 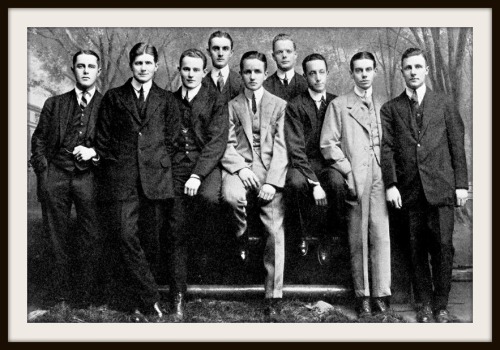 (They have a fondness for nursing homes too. During World War II, Whiffs’ songs hit the pop charts. Many current nursing home residents learned those tunes then — or heard them from their parents.)

Cole Porter was a Whiff. So was Connecticut Senator Prescott Bush, father of one US president and grandfather of another.

Obviously, you don’t just sign up and join. The audition process is rigorous.

Last spring, Nick auditioned with a solo rendition of “Mona Lisa.” Then he sang a Whiff standard — “Shall I, Wasting in Despair?” — to see how well his baritone blended with other voices.

Then came another hour-long interview — because Nick was auditioning not only as a singer, but for the role of business manager. He’d done that with the Spizzwinks, so he already had experience organizing a world tour.

The Whiffs loved Nick’s voice, and his business plan. They liked his responses too to questions about how he’d deal with the media. This is a big moment in the group’s 110-year history: For the first time ever, there is a female Whiff.

Once he was “tapped” for membership, it was an easy decision to defer his studies for a year. Nick says his parents were supportive — “maybe even jealous” — about his opportunity to travel the globe, singing, “before I start an un-musical job for the rest of my life.”

Nick has mapped out an arduous schedule for the Whiffs. Four major tours take them to 15 countries, on 6 continents. 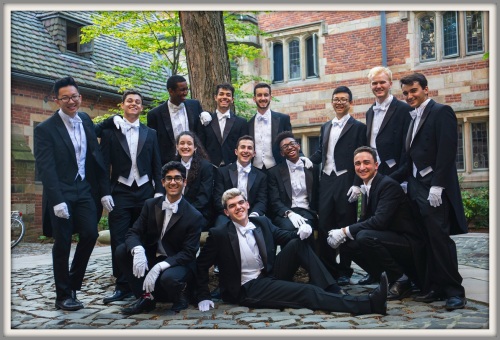 The 2019 Whiffenpoofs. Nick Massoud is kneeling, on the right.

On February 14, Nick brings his group back to town again. They’ll perform at Staples — his alma mater — for his former teacher Luke Rosenberg’s choirs and choruses. Staples Players will be there too — Nick was a noted actor, back in the day — and English teacher Brian Tippy may bring his classes. After all, he’s a former Whiff.

So is State Representative Jonathan Steinberg. Who knew?

When they’re not singing, the Whiffenpoofs enjoy local attractions. In Boulder, they went hiking. Nick Massoud is 5th from left.

As Steinberg, Tippy and Prescott Bush prove, there is life after Whiffenpoofs. So what will Nick do, when he returns as a senior next fall?

He’s a global affairs major. He interned last summer with Boston Consulting Group. They’ve already offered him a job in New York, after he graduates.

(For tickets and information on the Whiffenpoofs’ February 2 Westport concert, click here. In the video below, Nick Massoud is at the far left.)

Orphenians: One More From The Road

They don’t even need a plane.

Orphenians combined with other choruses from California, Arizona, Illinois and Tennesse — the culmination of 4 days of intense vocal workshops with internationally known Chanticleer.

Yesterday featured Chanticleer and the choirs in a day-long residency. Each performed individually on the stage, and attended master classes led by world-renowned operatic mezzo-soprano Dolora Zajick.

At night, 300 singers joined with instrumentalists from the Oakland Symphony Youth Orchestra, in a program featuring the West Coast premiere of Lars-Erik Larsson’s “God in Disguise,” and the world premiere of “Birdsong” by Zajick (composed for the occasion).

The Orphenians, in the after-concert glow of Davies Symphony Hall.

Rondi Charleston — whose daughter Emma Ruchefsky is an Orphenian — was awed by “these glorious voices blending together in beautiful harmony, floating over the full house. Our Orphs rose to the occasion, and achieved a new level of artistry. It was a magical evening full of hope for the future — of music, and humanity.”

Of course, as a parent she’s biased. Doug Bond — a  1981 Staples grad (and former Orphenian, who traveled to Europe with director George Weigle) — might be biased toward the old days.

He adds that Chanticleer encouraged cell phone use during the concert, and gave directions on how to post videos to Vine.

To see all the Vines from last night, click here.

To view just the Orphenian videos from the 5-day adventure, click here.

(Be sure to right-click “Unmute” to hear these great voices!)

Orphenians have been in San Francisco just a day. But already Staples’ elite a cappella choir has spread their music far and wide.

As their plane landed, the high school students gave thanks to the Jet Blue crew in song.

Yesterday — the day before beginning intensive rehearsals for the prestigious Chanticleer Youth Choral Festival — the students and director Luke Rosenberg toured the area.

There — atop Twin Peaks — they looked down on the city.

Once again, they sang.

If the interminable weather has got you down — and played havoc with your trips to, say, Broadway, for entertainment — here’s an “06880” special.

Last week, nearly a dozen Broadway stars came to Staples. They performed a benefit concert, helping Orphenians — the elite singing group — who head to San Francisco later this month. (They’re one of only 10 high school choirs invited to perform at a 4-day workshop with Chanticleer.)

The concert was organized by Adam Kaplan. He’s a 2008 Staples (and Orphs) alum, and already a Broadway veteran (“Newsies”).

Adam rounded up some of his most talented buddies, from the biggest New York shows. They performed spectacularly — and, in between numbers, added insights about the importance of high school theater and music. Adam and fellow Staples grad Mia Gentile were particularly compelling.

Here’s the entire show. It’s exactly the warmth we need, in this long, cold winter. (NOTE: You’ll have to click the underlined “Watch this video on YouTube” once it loads.)

Posted on December 7, 2014 | Comments Off on The Orphenians’ Gift Box

The Orphenians are entering their busy season. Staples’ elite a cappella group is in  high demand during the holidays.

But they’re also looking ahead to spring. In March, they’ve been invited to San Francisco. They’re one of 10 schools — and the only one from the East Coast — to participate in Chanticleer’s National Youth Choral Festival.

It’s an expensive undertaking. To raise funds, they’re bringing a giant music box to their performances. Donations are gratefully accepted.

The box was there last night, for Chanticleer’s performance at Christ & Holy Trinity Church.

The Orphenians, and their gift music box.

It will be out this weekend too, at the Candlelight Concert. If you’d like to help, drop cash or checks (made out to “Staples Music,” with “Orphenians” in the memo line) into the box.

Comments Off on The Orphenians’ Gift Box

Staples’ Orphenians will bring their voices there.

The elite ensemble is 1 of only 10 high school choirs invited to participate in the Chanticleer National Youth Choral Festival in March. The 4-day immersion program features coaching by members of Chanticleer, the internationally known choral performers and educators.

The climactic event, on March 30, is a gala concert at Davies Symphony Hall.  Orphenians, the other 9 high school choirs, Chanticleer and guest artists will share the fabled stage.

This is not Orphenians’ 1st big trip. In the 1960s and ’70s, under George Weigle, the group traveled to the Virgin Islands, Austria and Poland. In the ’90s, Alice Lipson took them to Italy and the Czech Republic.

A steering committee wants to help all Orphenians — including those with financial constraints — make the trip. They’d like to defray the cost of meals and additional activities, too. To help contribute or offer ideas, click here, email lrosenberg@westport.k12.ct.us, or call 203-341-1309.

Want to hear Orphenians? Here’s their version of the intricate Haitian piece, “Tap Tap,” from the 2014 Spring Concert:

Orphenians is a 56-year-old elite choir at Staples. Director Luke Rosenberg is working hard to make them the world’s reigning a cappella chorus — at least, at the high school level.

On Wednesday, Chanticleer visited Darien High School for a choral festival. Participating were their hosts, plus choirs from Staples, Westhill-Stamford and Brewster Highs.

It was a long, intense but joyful day. First, everyone rehearsed 2 pre-selected pieces as a mass choir, under the direction of Chanticleer’s musical director.

Each high school choir then performed its own selected repertoire, for the other schools to enjoy. Next came Orphenians’ special 90-minute workshop with 3 members of Chanticleer.

Here’s an iPhone recording of Orphenians performing “Tap-Tap.” You can hear the group live at Staples, later this spring.