Evan Sheiber was born with hypo-plastic right heart syndrome. That means he has a single ventricle — half a heart.

It’s not a cure. Children born with this syndrome eventually require a heart transplant. The goal is to avoid the operation until absolutely necessary. 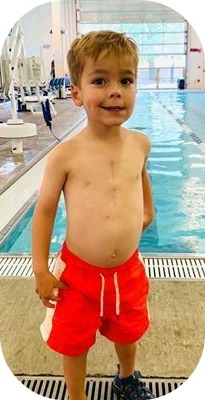 After Evan’s open heart surgery, he has more energy. He keeps up with his identical twin James. He climbs, plays on the playground, and runs away from his parents at bedtime.

Yet he slows down more quickly, breathes more heavily, and has foot and leg pain.

Evan’s mother Britt notes other challenges too. A simple cold sent him to the emergency room. The flu can be devastating. She is always alert to danger.

Thirty years ago, most babies born with half a heart did not survive. But as far as medicine has come, there is much more to learn.

Britt has helped Dr. Rahul Rathod, director of the Single Ventricle Program at Boston Children’s Hospital, raise money for research and a registry.

With strong support from Westport, she has raised over $150,000.

To join the JoyRide event — or contribute without spinning — click here.

Click here to learn more about the FORCE Fund (formerly known as Evan’s Heart Fund), which directly impacts the lives of everyone like Evan living with a single ventricle.

But that’s hardly the end of the story.

Evan Sheiber is a young boy born with only 1 pumping chamber in his heart. Like Mat, he too is a Westporter.

Evan had a blood transfusion during open heart surgery a year ago. He’ll need another in his next operation. When Evan’s mom Britt saw the “06880” story, she posted a thank-you on Mat’s Facebook page. (Like Mat too, Evan was featured on “06880,” last spring.)

Evan is also the star of an inspiring video, produced this past summer by Boston Children’s Hospital.

The video inspired Mat and his fellow blood donors to write cards to Evan.

There were over 100. All, Britt says, were “incredibly thoughtful and sweet.” 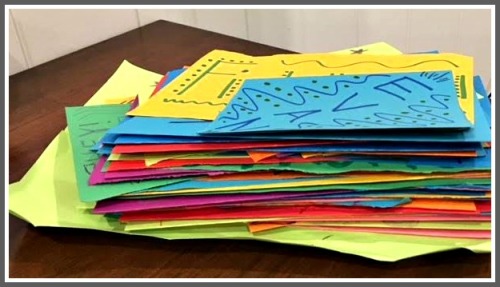 A few of Evan’s many cards.

One young man wrote: “Hey Evan. I’m a student at Northeastern. Just wanted to say I’m rooting for you buddy. Thank you for showing me what courage is. Much love buddy. Chris Li. ”

Another said, “Dear Evan, You are an inspiration to all the brothers at Northeastern in Delta Tau Delta. Keep Fighting. “

A third read, “Surf’s Up. Ride the wave to greatness.”

And this: “ While we’ve never met in person, you’ve left a lasting impact on me. You inspire me to give back and help every day.”

Britt read each one to her son. He’s only 1 1/2 — not yet old enough to fully understand the words — but he loved the colorful drawings. 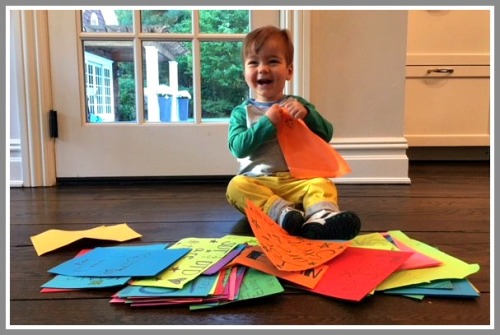 Britt put them in Evan’s safe-keeping box. She’ll read them to him again, when he is 3 or 4 — before his next open heart surgery.

“I know they will encourage him to be brave, and to fight. Some will make him laugh,” she says.

Britt and her husband Brett (!) have 3 boys (including Evan’s twin James), and 1 daughter.

She will be “incredibly proud” if her 4 children grow up to be the kind of fine young adults who give back to their communities.

You know — just like those inspired by her and Evan’s fellow Westporter, Mat Jacowleff.

Congenital heart defects (CHDs) occur in 1 out of every 100 births. The impact on babies — and their families — is profound.

Westporter Britt Sheiber is the mother of twin boys, Evan and James. They turn 1 on April 27 — her birthday.

It’s been quite a year. During Britt’s pregnancy, a 16-week ultrasound revealed Evan’s CHD. His type — “half a heart” — is extremely rare.

The Sheibers searched for the best treatment. They found it at Boston Children’s Hospital.

Evan was in the NICU for a few weeks. Britt drove to Westport every other day for a few hours, to see James and her 2 older children.

Finally, Evan came home. But he caught a cold, and ended up in the Yale-New Haven Children’s Hospital ICU.

That’s where he received a “Bummer Bear.” Passed on by the (coincidentally) Westport mother of another boy with CHD, it’s a special teddy bear. His zipper — representing the surgery scar — opens to reveal a tiny red heart, with little white stitches.

The mom sent an inspirational letter too.

The gifts gave Britt hope, and made her realize she was not alone. They helped her through Evan’s first open heart surgery — along with calls and texts from Ali Marcus.

Ali is another Westport mom whose son West was born with CHD. The women had  been introduced by mutual friends right before Britt gave birth to Evan, as West was preparing for his own surgery.

After Britt received her Bummer Bear for Evan, she paid it forward by sending one to Ali for West. 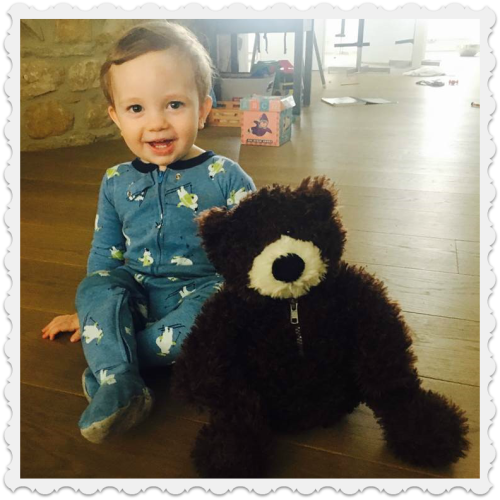 Not long ago, the women heard about Fatemeh Reshad. The 4-month-old Iranian child — born with a congenital heart defect — was flying with her parents to Oregon for a life-saving procedure.

But when President Trump’s executive order banned travel from 7 countries, they had to cancel the surgery.

The women were stunned. As “heart moms,” they would go to the ends of the earth to get their children the best treatment possible. They knew Fatemeh’s mother was doing the same.

Britt and Ali posted Fatemeh’s story on social media. They reached out to their contacts at Yale-New Haven and Boston Children’s for help. After Governor Andrew Cuomo and the International Refugee Assistance Project intervened, the federal government allowed Fatemeh and her family into the US.

The women quickly sent Fatemeh a Bummer Bear, plus other gifts: a personalized pillow, cheerful button-up onesies, a pacifier/lovey for her chest, and cozy socks for Fatemeh’s mom. They added encouraging letters too. 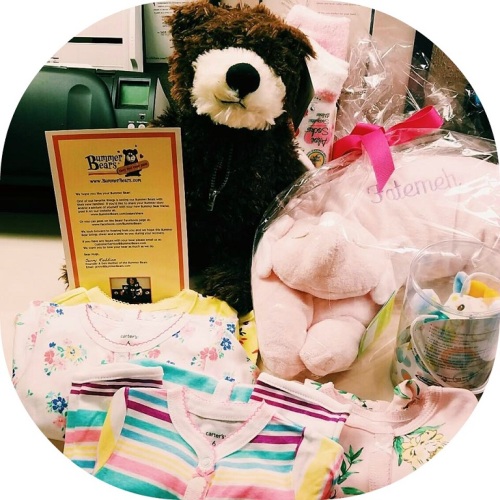 Bummer Bear and assorted donations for Fatemeh, thanks to Westport’s “heart moms.”

Britt takes care of him — and many others. Realizing the lack of awareness (and funds) for children with CHD, she founded Evan’s Heart Fund. All money goes to single ventricle research. This winter at JoyRide, she raised $27,000. Another fundraiser is in the works. 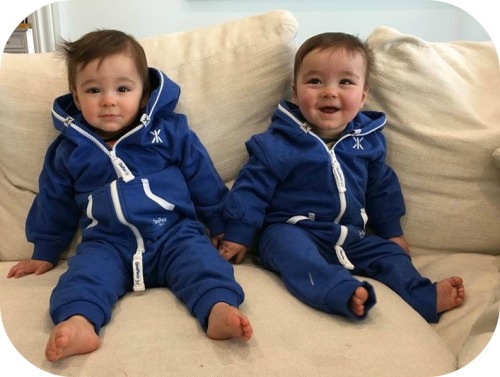 As for West: He’s a happy 1-year-old, chasing his 3 big brothers and 1 big sister. He too must be monitored every day for the rest of his life.

“Our family has been changed forever by this,” Ali says. “We are grateful for our hearts every day. What an incredible organ!”

So she, Britt and other moms stand ready to help the next heart mom, and the one after that.

It’s the heartfelt thing to do.