As Staples High School’s Class of 1986 prepared for their 30th reunion, there was the usual excitement — from some alums. Others thought: meh.

A couple of months ago, though, came news of the suicide of a class member. It was the 2nd in a brief span. Not long before, Westport police sergeant Robert Myer killed himself.

The deaths threw Craig Librett for a loop. A public relations expert now living in upstate New York, he had not been involved in reunion planning. But — feeling shock and grief — he did what many classmates did: He went on Facebook.

Facebook’s header montage for the Staples Class of 1986 page.

Like other classes, ’86 had an occasionally-looked-at page. Librett posted some thoughts.

“The suicides struck a chord with almost everyone in the class,” Librett says.

“People did more than just comment. They shared intimate things — about depression, suicide, themselves and their families. They really talked about what was going on in their lives.

“If it’s possible to feel something over Facebook,” Librett adds, “we felt it.”

The outpouring of emotions — and levels of honesty among people who had not seen each other for 30 years — was astonishing.

In 1985, this group of Staples High School “Student Educators” posed for a photo.

Then Andrea Greenberg contributed a long post. She called her class a “tribe” of people who had always been there for each other.

That word resonated. “Tribe” became the symbol of the Staples Class of ’86. And the reunion became, Librett says, “transformational.”

Members realized the upcoming event could be more than just a gathering. Plans snowballed — not for mourning lost classmates, but for celebrating their own and their classmates’ lives, 30 years after graduation. A large number will come together tomorrow night (Saturday, July 30) at the Saugatuck Rowing Club.

At the same time, they’ll honor the half dozen or more who have died. Tomorrow morning there’s a ceremony at Winslow Park.

The class is doing more, too. They’ve already raised more than $4,000 for the American Society for Suicide Prevention.

And on October 23, they’ll participate in the organization’s  “Out of the Darkness Walk” at Sherwood Island. Librett has helped formed a “My Tribe ’86” team.

It will be a very different walk than the one they participated in 30 years ago, at graduation. But just as important.

Thirty years have not dimmed the Staples Class of 1986’s tribal spirit.

They’ve only enhanced it.

Walk Out Of The Darkness For Emma

Emma Jane von Euler was a beautiful, bright and articulate 17-year-old.  A talented musician with an outgoing personality, she was a caring daughter, sister and friend to many. 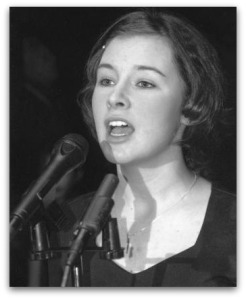 Westport — where her father Peter teaches 5th grade — and Fairfield, where the von Eulers live, were devastated.

Her mother Nancy — writing on a blog she created to preserve Emma’s life — described a “tsunami of destruction that swept up family, friends, teachers, ministers, mentors and neighbors.

“All of us struggled against the current of guilt, pain, shock and bewilderment,” Nancy continued.

For her immediate family, her father, sister and me, life as we knew it ended.

We will never fully understand why Emma ended her life; what caused what must have been an incredibly deep sense of despair and hopelessness; or why she couldn’t reach out to us or to the many other caring adults and professionals she had in her life.

But let’s face it, answers, even if we could find them, won’t fill the incredible hole in our hearts.

The von Eulers established a scholarship in Emma’s name.  It’s awarded annually to a Fairfield high school senior who plans to continue studying music in college.

Recipients are talented, sure.  But they also show a “kind and generous spirit, and a desire to help and inspire others.”

In other ways too, Emma lives on.  This Saturday (October 22), there’s an “Out of the Darkness Walk” at Sherwood Island State Park.  The event raises money for research and education programs to prevent suicide, increase awareness about depression and suicide, and provide support for survivors of suicide loss.

The sponsor — the American Foundation for Suicide Prevention — helped the von Eulers tremendously in the months after her death.

It’s not the 1st walk in Emma’s memory.  Just weeks after her death, high school friends formed a team.

“It was one of the many ways that kids showed us they knew best how to respond to the tragedy,” Peter says.  “They took action in a positive way.”

The teenagers asked the von Eulers to walk with them.

“At first we were reluctant,” Peter admits.

“We were struggling, and not feeling like being very public.  But we wanted to support their initiative and bravery.”

Though extremely hard, he says, “we followed their lead.  And it helped us — a lot.”

They hope others will join them, as they walk out of the darkness.  Into the bright sunlight.

In honor of their beloved daughter — and all the too-many-other victims of suicide — so that no other family will have to march again.

(To participate in this Saturday’s Sherwood Island walk — or make a donation in Emma’s name — click here.