This is an astonishing story about a local man who needs help. And the many Westporters who have already rallied to his aid.

David Hidalgo is a 31-year-old Costa Rican man. He came to the US in search of the American dream.

He works for himself. He’s a carpenter, handyman, home improvement guy extraordinaire. Most of his clients live in Westport. They adore his workmanship, care, willingness to tackle any project; his problem-solving, humility, politeness, and his ear-to-ear smile.

David met his wife Haiying shortly after he arrived. They have 2 beautiful children: Santiago (age 11) and Dannika (3). He’s involved in his son’s Boy Scouts and basketball team, and the Bridgeport community where they live. 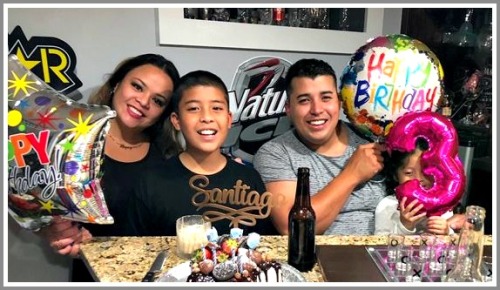 David and Haiying Hidalgo, with their children at home….

Last month, David was diagnosed with acute lymphoblastic leukemia. Though devastated, he and Haiying thanked God: If they had waited even a few days longer, doctors said, he’d be dead in 3 months.

David is being treated at Yale’s Smilow Cancer Hospital. He faces at least 8 months of difficult, painful treatment — with no idea when he can return to work.

David was young and strong. He has no short- or long-term disability insurance. There is no “office pool” to collect money. He and Haiying were hesitant to ask for help. But they have no choice.

Of all times for this to happen, the holidays are the toughest. Santiago says he wants nothing for Christmas, except for his father to recover.

With no income — and staggering bills ahead — the situation is dire. Sally Wanamaker — one of David’s many fans — has created a GoFundMe page. Click here for the link. 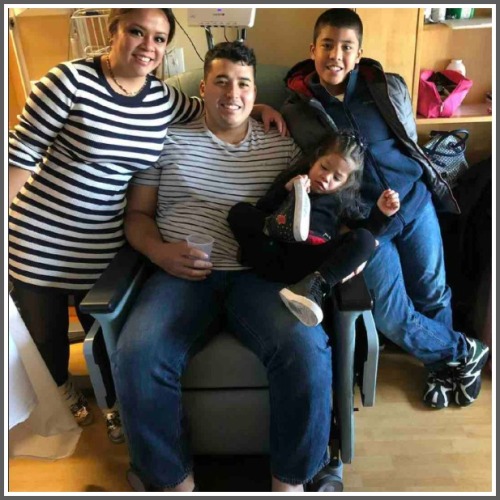 … and in the hospital.

Meanwhile — despite compelling letters from an oncologist and social worker — David’s mother was denied a humanitarian visa by the US Embassy in Costa Rica. Although he may receive a bone marrow transplant as early as February or March — assuming a match is found — without his mother to help, his children will be shuttled to neighbors and classmates’ homes, while Haiying cares for him in the hospital.

Four of David’s siblings in Costa Rica will be tested, to see if they are a transplant match. The odds are good at least one will be. However, after the denial of David’s mother’s humanitarian visa, the family worries that the siblings might be denied a similar visa.

Incredibly, there is more to this story. Haiying is a naturalized US citizen. Santiago and Danika are citizens from birth.

Before his diagnosis, David was in the process of getting his green card. According to a law that went into effect in October, if he applies for any form of state or federal financial aid, his green card will be denied.

He will lose his dream of living, and raising his family, in a country he loves (and pays taxes in) — a country his family considers their home. 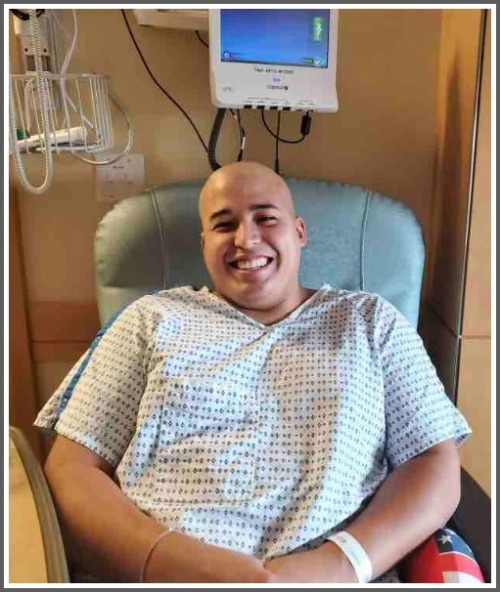 Westporters have stepped up quickly. A client of David’s donated plane tickets for his mother and a potential bone marrow donor. Hopefully, they can be used.

Another Westport client wrote a check to David’s son’s school, to pay the remaining tuition for the year.

Every little bit helps. The other night, Sally Wanamaker dropped a few items off at David’s house, near the Beardsley Zoo. Every home on the street was decorated for Christmas — except his.

She passed the word. A Westport client — who considers David a member of the family — donated lights, and an inflatable Santa. A landscaping company put everything up. Despite the tough times, Santiago and Dannika’s house now glows too.

This is the holiday season. We’re all going a million miles an hour — and we’re asked often to help out, for very good causes.

I can’t think of a better one than this. Click here for the GoFundMe page.

And then share either this post or the GoFundMe link — or both — as far and wide on social media as you can.