“The Number On Great-Grandpa’s Arm” Comes To Westport

Posted on November 6, 2019 | Comments Off on “The Number On Great-Grandpa’s Arm” Comes To Westport

A pair of bomb threats to a Bridgeport temple — just 2 days before the first anniversary of the mass shooting at a Pittsburgh synagogue — reminds us all that anti-Semitism is still very real.

The film — which features an intimate conversation between a young boy and hi beloved great-grandfather, an Auschwitz survivor — includes hundreds of animated drawings by Westport filmmaker/painter Jeff Scher.

The screening will be followed by an audience Q-and-A with Elliott Saiontz, the film’s young narrator; his mother, and Scher. The discussion will be moderated by Rev. John D. Betit, of Christ & Holy Trinity Episcopal Church. 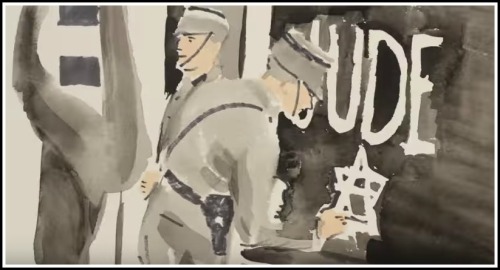 One of Jeff Scher’s drawings in the film.

“Their stories provide invaluable lessons for both adults and children. I feel a deep sense of obligation to make our community aware of this opportunity for our children — and adults too — to bear witness to and learn from survivors’ experiences.”

Unfortunately, she says, in the aftermath of the Tree of Life Synagogue attacks — and others, in places as varied as Christchurch, Poway, El Paso and Halle — “it is more important than ever to commit to programs and discussions that clearly define expectations for, and the responsibilities of, all members of the community. Hate cannot be normalized.”

(The November 10 film is sponsored by the Federation for Jewish Philanthropy of Upper Fairfield County, PJ Our Way and the Westport Library. After the screening and discussion, the Nu Haven Kapelye offers “a musical journey from sorrow to joy, through the Klezmer tradition.” Both events are free. Click here for more information.)