A few years ago this month, I got a panicked text from a soccer player I’d coached at Staples High School.

He graduated from college the previous year. Now — less than a year into his first job — he said, “I owe thousands of dollars to the IRS. How come no one ever taught me about taxes at Staples??!!”

And a couple of weeks ago, every senior took part in Staples’ first-ever Financial Reality Fair. They gave it high marks.

But the money shot involved money.

The idea came from the classes’ regular visits to Financial Reality Fairs at other schools. White and Klein asked each other, Why not do one at Staples?

White took the lead. Principal James D’Amico and the school’s Collaborative Team gave their blessings. But making it a reality took a ton of work.

Connecticut’s Credit Unions were the sponsors. They provided the curriculum, materials and a number of experts.

The Staples PTA provided a $4,000 Wrecker Mini-Grant. They also put out a call for (financially literate) volunteers. The response was tremendous — including members of Westport’s Board of Finance and Education. Students who had previously been to a Financial Reality Fair also volunteered.

They were then given the starting salary (in Connecticut) for that job. Each student was also saddled with student loan debt. The amount owed depended on the years of education required for that profession. The longer they were in school, the higher their debt.

They were also assigned — randomly — a credit score. 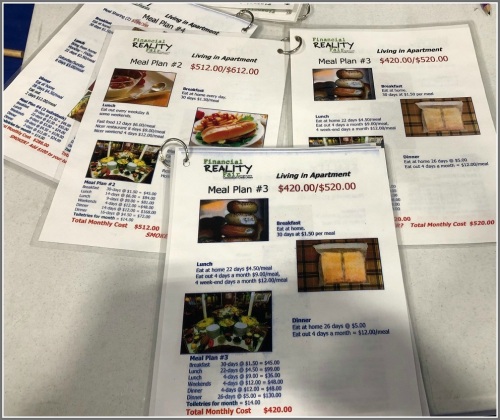 By themselves, or — if they wished — with a “roommate,” students visited tables. There were many options. How often would they eat out? Did they want basic cable, or the platinum package? What kind of vacations would they take?

They could choose one-off expenses too, like buying an Xbox. If they wanted to buy a car, fine — but they had to take out a credit union loan. (Hey, they were the sponsors!)

There was also a mandatory “wheel” to spin. It saddled them with unexpected costs (lost cell phone, broken leg) or extra funds (overtime pay, birthday gift).

The wheel of fortune. Or misfortune.

Each choice carried consequences. As the students quickly learned, each consequence led to others.

When they were done with their budget, each teenager met with a volunteer financial counselor. They had undergone training, to ask questions like, “Why did you make that decision?”

The final step: meeting with a financial counselor.

It was a very engaging — and educational — day.

The students were surprised at the effect of student debt on their budgets. They were even more amazed at the impact of credit scores.

“I had to pay more than my friend for the same truck!” one boy said, astonished.

Feedback was excellent. The soon-to-go-off-to-college-and-then-become-adults began seeing finances not as something provided by the Bank of Mom and Dad, but as actual living, changing realities.

It was a reality check for some. A wake-up call for others.

And for one — well, who knows?

“I realize I’m not ready for life,” the student said.

But he or she is a lot more ready than that former soccer player who texted me — panic-stricken — after his first encounter with the IRS.