Tommy Ghianuly — for nearly 60 years the owner of Compo Center Barber Shop, and for every one of those days one of the truly great human beings in town — died this morning.

In November, “06880” honored Tommy as our Unsung Hero of the Week. Here’s that story.

It’s exactly what its name says: a barber shop.

And it’s been that way for nearly 60 years. 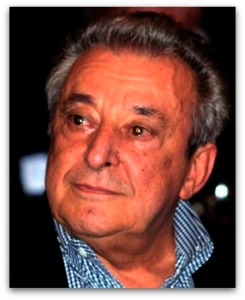 Tommy Ghianuly was one of the first tenants when Compo Shopping Center opened up. Just out of the service, the Bridgeport native was in the right place at the right time.

So did their kids.

Tommy was good. He loved to talk, and his customers loved their conversations.

Times changed. He added female barbers. He had to get rid of his shoeshine guys.

The kids of Tommy’s first customers grew up. They married, moved back, and brought their own kids. Now he’s cutting the hair of their kids.

He saw so many stores in the shopping center come and go. McLellan’s. Lenette’s. Westport Record & Tape. Zaro’s. The Ice Cream Parlor.

Yet Compo Barbers — and Gold’s — are still there. And still growing strong.

Compo Center Barber Shop is one of the last vestiges of old Westport. You hear it in the casual conversations that take place in the waiting area. You see it in the warm, loving way Tommy greets all his customers — the ones who have come for 50 years, and the ones who just moved here last week.

You see the old Westport on the walls, too. For decades, Tommy has collected vintage photos. They show it all: the original Main Street. Horse-drawn trolleys. A long-ago blizzard that shut down the trains.

It’s a collection the Westport Historical Society would be proud to own.

Tommy Ghinauly and his rotary phone. On the wall behind him are some of his many historical photos — and those of several generations of customers, posing together.

Since 1959, Tommy Ghianuly has been doing it his way. That makes him our Unsung Hero of the Week.

If not the Month, Year or even Decade.

In 2011, Tommy Ghianuly was honored for what was then 50 years in business. Here’s the story I posted then:

Last Saturday, I got what’s left of my hair cut.

Not exactly blog-worthy — except for this:

When Tom Ghianuly — who has been my barber at his Compo shop since I was a teenager, and who cut my father’s hair for even longer — asked what was new, I couldn’t tell him.

I couldn’t mention that the next day, over 100 of his many customers, friends and admirers had planned a surprise dinner in honor of his 50 years in business.

It’s not easy to keep a secret from a barber — especially one as well-connected and curious as Tom — but these guys did.

The event was the brainchild of attorney Dick Berkowitz.  He had help from a group that included Jim Schadt, Alan Nevas, Ron Gordon, Les Giegerich and Steve Siegelaub.

It’s a microcosm of Tom’s clients and fans:  a former CEO of Reader’s Digest,a retired US District Court judge, a guy who built half of Westport — all there to honor their longtime, beloved barber.

Giegerich — 96 years old — was almost 50 when Tom started cutting his hair.  Seigelaub was 5.

So did the presence of the Brooks family — Tom’s longtime landlord at Compo Shopping Center.  How often do landlords fete their tenants?

A few people spoke.  They presented Tom and his wife Carolyn with a weekend at the Ocean House at Watch Hill.

In typical Tom fashion, he never expected anything like this — even after half a century of work, even after seeing the Birchwood Country Club parking lot filled as he and the Berkowitzes drove up.  (Dick had told Tom he’d take him and Carolyn out to dinner.)

He had no idea it was packed for him.

First Selectman Gordon Joseloff was one of the many Westporters already inside.  When the ceremony began, he read a proclamation.  Then he gave a framed copy to Tom, to hang in his shop.

I’m guessing that on Tuesday — when Compo Center Barber Shop reopened — Tom was embarrassed to put the proclamation up.  He’s much more comfortable with the many photos of historic Westport he’s collected, and which line the walls.

But after 5 decades, Tom Ghianuly is a very important part of town history too.