She lived in Boston when that city inaugurated the original First Night — an alcohol-free New Year’s Eve celebration at a variety of venues, with performances, entertainment and fun for all ages.

She moved to Westport 21 years ago — the same year our town started its own First Night celebration.

She joined the board 2 years later. Now she’s president.

And though other First Nights have come and gone, Westport’s remains vibrant and strong. It’s one of only 3 left in Connecticut — and, judging from their websites, ours blows Danbury’s and Hartford’s out of the water.

Barbara is a strong believer in community service. She chairs Westport’s Make a Difference Day and is involved in breast cancer awareness, among other activities.

First Night — a happy, upbeat event, on a day when everyone looks forward and feels fresh — holds a special place in her heart.

“It’s live entertainment,” she says. “It’s a way of introducing children to talent, and for adults to have plenty of fun too.”

But keeping First Night alive is hard. There’s a perception that it’s only for kids (it’s not). More families now travel over the holidays. Non-residents don’t think they’re invited (they are). And the threat of bad weather always hovers overhead. 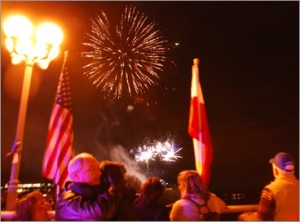 Fireworks in winter — a tradition that moves this year to Jesup Green.

First Night is an all-volunteer effort. Attendance — by button-buying people — is crucial. Costs include performers, sound engineers, insurance, police and fire support, and pyrotechnics. (A barge is being rented this year, because the new Levitt Pavilion is no longer a viable spot for shooting fireworks.)

Westport’s First Night lives on thanks to the ongoing support of sponsors and the town of Westport, along with a very fiscally responsible board. While many First Nights have folded, Westport’s is now 21 years years old. “We’re legal!” Pearson-Roc jokes.

(New events this year include a fashion show with a “Project Runway” contestant; 2 children’s performers; telescopes on Jesup Green, with Westport Astronomical Society members offering guidance, and popular college comic hypnotist Jim Spinnato. Regular keyboardist Mark Naftalin — hot off his election to the Rock and Roll Hall of Fame — is back at the Westport Historical Society. For a full schedule, and information on buying buttons, click on www.firstnightww.com.)