It’s been 30 years since Lisa Brummel starred at Staples and Yale. But Connecticut hasn’t forgotten her. 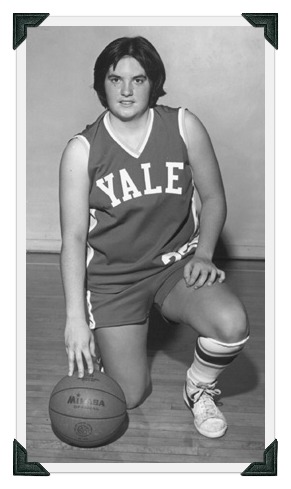 Lisa Brummel, back in the day.

Lisa’s story is legendary. She began playing basketball here in 3rd grade, with guys from her neighborhood. An All-State selection in high school, she was the 1st Staples player to score 1,000 career points.

At Yale she made the All-Ivy League 1st team — 4 years in a row. She led the Elis to the 1979 league championship, and was Ivy MVP. Two years later, she was named an Academic All-American.

Lisa also lettered in softball, volleyball and track at Yale. She was named to the Ivy League Silver Anniversary Honor Roll in softball, and earned Yale’s George H.W. Bush Lifetime of Leadership Award.

For 3 years — beginning in high school — she was a catcher for the Raybestos Brakettes. All they did was win ASA national and WSA world championships.

In 1989 Lisa joined Microsoft. She’s still with them today. Her current title is Chief People Officer.(EWeek named her 1 of the 25 Most Influential People there.

But she has not forgotten her basketball roots. She’s co-owner of the Seattle Storm — the 2010 WNBA champs.

Next month’s induction ceremony in Hamden will be a nice homecoming for Lisa. But there will be one Westport connection even she might not know: A co-founder of the Connecticut Women’s Basketball Hall of Fame, back in 1987, was Ann Fariss. Before she was a college athletic director, she taught physical education — at Staples High School.