Thousands of Westporters from the 1960s have orgasmic memories of burgers from Big Top. 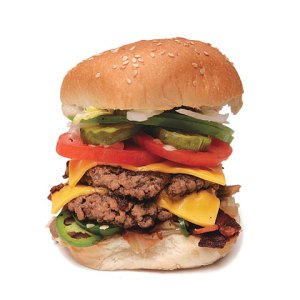 My burger was half this size.

Westport’s newest favorite restaurant has drawn rave reviews.  The parking lot is always packed — and because many of those cars belong to high school students, I’ve stayed away.  Hungry teenagers who’ve had their drivers licenses for 12 hours, combined with lines stretching out the door in sub-freezing temperatures, is not my cup of tea.

But a window of opportunity opened the other day — there was an open spot, and it wasn’t even the handicap one! — so I zoomed in, just like a teenager.  I had to see what all the hype was about.

I eat red meat maybe once a week.  So I ordered the dubiously named “Little Cheeseburger.”  (I heard snickers from the guys behind me in line.  Hey, shut up — I’m a little guy.)

I had studied the toppings menu while waiting, but with a dozen or so folks waiting behind to order, I felt some performance anxiety.  I blurted out a combination of onions, lettuce, pickle, jalapeno peppers, ketchup and relish.  Hey, there’s no accounting for taste.  The ETA, I was told was “7 minutes.”

Six minutes later — remember, kids, when you go into business:  Under-promise, and over-deliver — my “little cheeseburger” was bagged and handed over.

I filled my red-meat quota for the week (month) (winter).    You can be sure that — just as soon as I finish digesting it, some time in April — I will be back for more.

Like Loading...
This entry was posted in Restaurants, Westport life and tagged Five Guys, Fuddruckers. Bookmark the permalink.