Charlie Lomnitzer — a Westport social studies teacher for 30 years– died last week, surrounded by loved ones at his longtime Black Rock home. He was 91.

The New York city native joined the US Army in 1946, age of 17. He was deployed to occupied Japan and served in the 24th Infantry Division, 34th Regiment, with the military police. Lomnitzer then continued to serve, as a Marine Corps as sergeant.

His respect for the military continued. He supported West Point athletes as a football season-ticket holder for 49 years, and was an honored member of its Five Star Club. He took interested students on tours of West Point too. 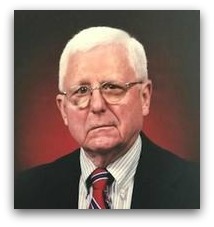 He taught for 3 decades at Bedford Junior High School and Bedford Middle School.

He was an avid walker, keeping fit with daily walks around St. Mary’s by the Sea.

He read several newspapers daily, and liked to discuss current events of any topic. He was a spirited sports fan, and loved traveling and cruising in Europe with his wife Beverly.

He was passionate too about cooking for the family. A favorite pastime was listening to the music of Frank Sinatra and big bands.

In addition to his wife of 60 years, Beverly, he is survived by his children, Charles L. Lomnitzer of New Bedford, Massachusetts; Lauren Novotny of Monroe, and Liesl Cugno of Stratford; 6 grandchildren, and nieces and nephews.

In his last year, Charlie Lomnitzer cared for by Masonicare Hospice-At-Home and by several caring aides from Companions & Homemakers. He developed individual relationships with each aide, in his own special way. His family is grateful for the hospice nurses and aides who lovingly cared for him.

A private memorial service takes place Friday (September 18, 12 p.m.) at First Church Congregational. He will receive full Military Honors on the front lawn of the church around 1 p.m.; all are welcome outside.

In lieu of flowers, memorial contributions may be made to First Church Congregational, 148 Fairfield Beach Road, Fairfield, CT 06824. Click here to sign the guest register.