Westporters know Larry Silver for his iconic images of “The Jogger” and “Beach Showers” — photographs taken at Longshore and Compo Beach, respectively.

But to the rest of the world, his most iconic image is “Headstand.”

Silver — a longtime resident whose works have been shown around the globe — took that shot in 1954 as part of a series in Muscle Beach, California.

Years later, the International Center for Photography featured those photos. The rest is history.

“Headstand” hangs in the Metropolitan Museum of Art, the Brooklyn Museum, the RISD Museum, and the Getty Museum, among many others. It’s been shown around the globe. 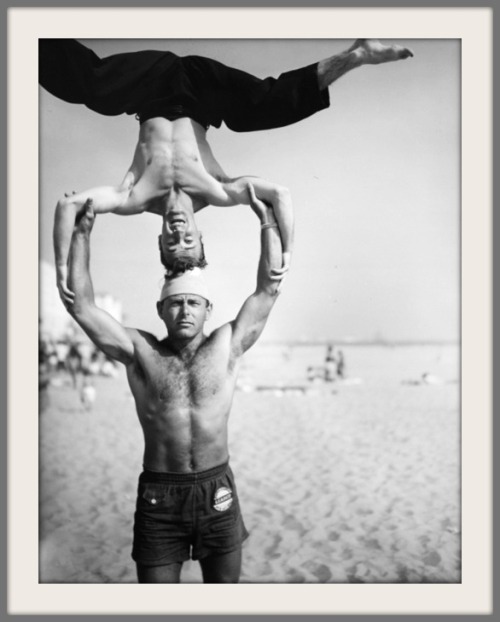 History will be made again on Wednesday, June 12.

Friends of WestPAC — the Westport Public Art Collections — holds its annual fundraiser at Rive Bistro (7 p.m.). “Headstand” is one of the world-class pieces in the auction. It’s the first time Silver has donated the photo anywhere.

He’s been urged for years to show the piece here. He was reluctant, claiming it’s not an image of Westport. Finally — thanks to WestPAC — he feels comfortable doing so.

You can bid on many wonderful works at the WestPAC event (and enjoy great food and more, too).

But only “Headstand” will have you doing backflips.

(For tickets and more information about the June 12 WestPAC fundraiser, click here.)

3 responses to “Headstand For WestPAC”