It was billed as a “VIP Party” the night before Shake Shack officially opens in Westport.

But the place was jammed like the hottest New York club.  The only person not there last night, I thought, was the fire marshal.

Then I saw him too. 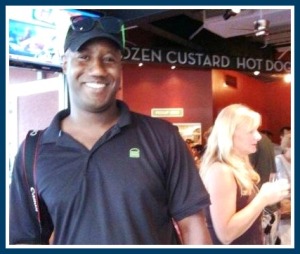 After a squintillion tries, the restaurant building on the Southport line — across the street from the old Toys R Us — finally has a winner.

When Shake Shack opens its doors this morning to the 3 non-VIPs who were not there last night, all of Westport will have a new favorite place.

There are realistically priced burgers made from great beef.

And — the killer app — beer and wine.

It’s a family place — like Five Guys — but occasionally Mom and Pop want a (non-soda) pop with their burgers.

Shake Shack CEO David Swinghamer and Danny Meyer Himself were there.  Both were clearly — and genuinely — excited about the location, the staff, the energy, the potential, and the community.

Meyer’s original vision for Shake Shack was a “roadside burger stand.”  But roadsides are hard to come by in New York City.

So — with its 13th location — Westport becomes the 1st suburban Shake Shack.

There have been at least 13 restaurants on this site.  This one is here to stay.